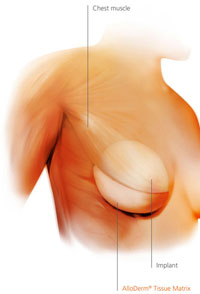 A recent study published in Plastic and Reconstructive Surgery examines the use of accellular cadaveric dermis (ACD) as an alternative to the total sub-muscular approach in breast reconstruction. During the breast reconstruction study, an Alloderm ACD – a bioengineered tissue substitute – created a “retaining envelope” for the breast implant, which was hypothesized to reduce the risk of capsular contracture.

Capsular contracture is a possible complication with some breast implant patients, occurring when scar tissue tightens around the implant. The cause of capsular contracture is unknown, but inflammatory reaction is thought to be a related problem. Doctors predicted that ACD could work by decreasing the typical inflammatory response that occurs around the breast implant.

During the two-stage breast reconstruction procedures, the ACD was attached in the breast crease as well as the pectoral muscle. The surgeons then created a space for the tissue expander, the lower part of which was covered by the ACD. After a few months, they removed the tissue expander and replaced it with a breast implant.

Between the procedure stages, Dr. Basu and his colleagues performed biopsies of the integrated ACD, along with histopathologic analysis. They found that, compared to the control group, the samples from the ACD showed significantly reduced levels of granulation tissue formation, among other positive differences.

The doctors concluded that ACD may impede capsule formation, thus possibly inhibiting capsular contracture. Although the findings of this study make a promising case for the continued use of bioengineered tissue in breast reconstruction, Dr. Basu stresses that it is only a snapshot of a process that takes place over several years, and further investigation is necessary to determine the effectiveness of ACD in eliminating capsular contracture.